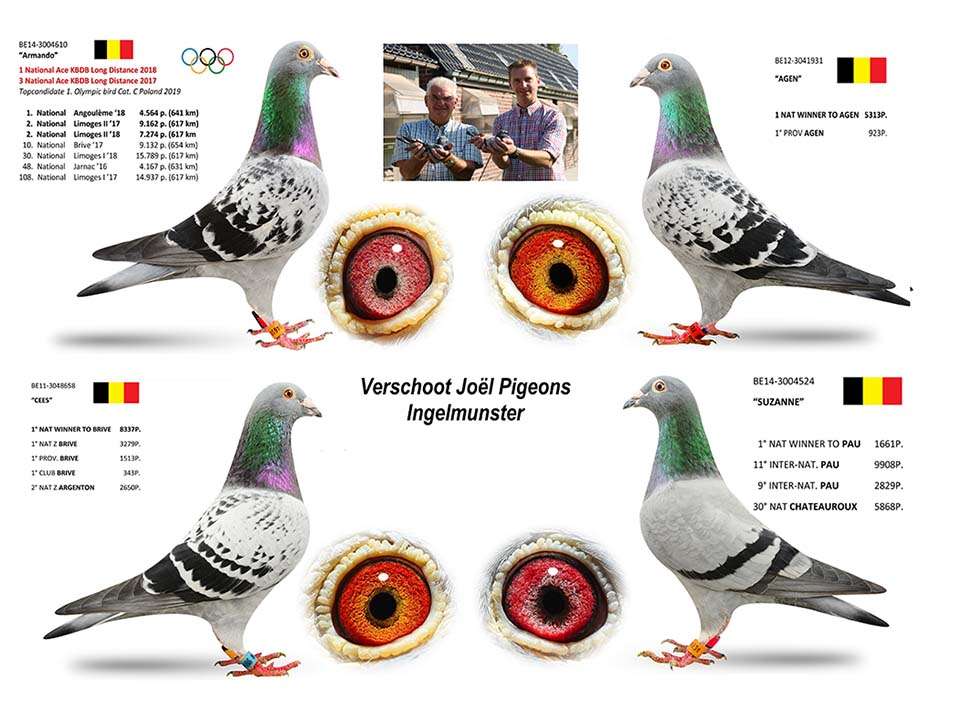 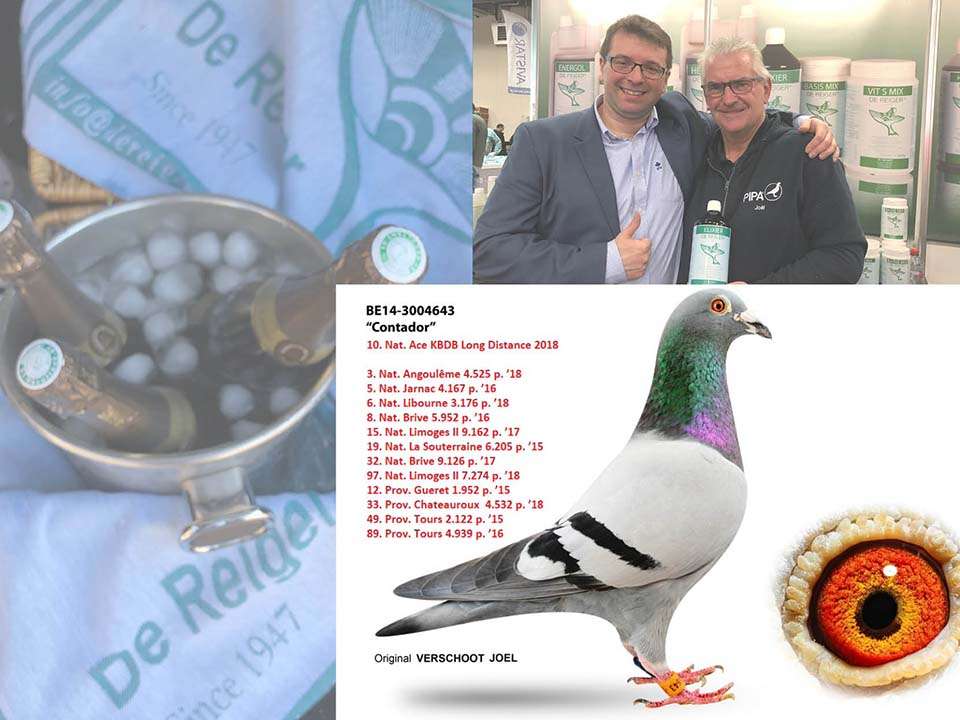 What are your best racing results / performances:

We have had top results in all disciplines from speed to long distance. The last 10 years we had several top results on National and International level and we achieved the top position in Belgium with Armando 1° Nat ace Kbdb.

In 2019, we had a spectacular pigeon auction of all our best racers and “Armando” brought us international fame. We had an auction of 178 pigeons and they brought in an average of €13,498.

Our best results are:

Use the products of De Reiger:

I choose the products of De Reiger as the best. I am a big fan of Elixier, which I give up to 3 times a week. All my 1° National victories and 1°Nat Ace KBDB Armando was flown with De Reiger.

From March to September I give De Reiger twice a week during moulting and breeding and of course in combination with other De Reiger products such as Basis Mix.

My pigeons always look very nice and fly and train very well as they should do on my loft. During the moulting and breeding season my pigeons are always in top condition and the products of De Reiger certainly contribute to that. 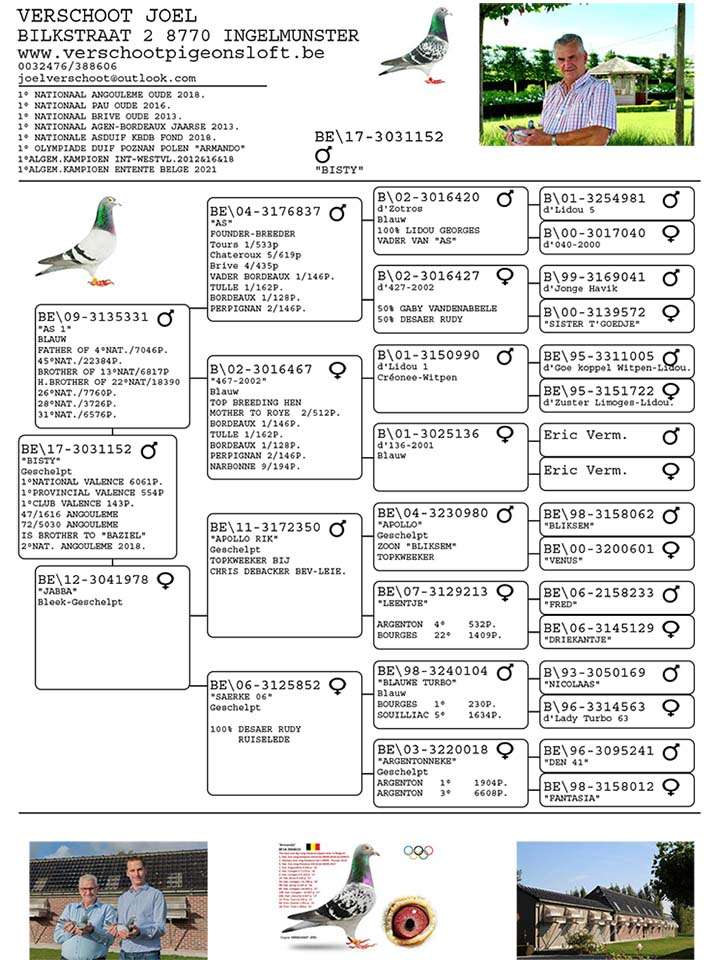 Origin of your pigeons (bloodlines):

My old pigeon are descendants of Mr Georges Lidou and Robert Dobbelaere from Marke crossed with pigeons from the bloodlines of Gaby Vandenabeele from different regional fanciers.

How big is your pigeonloft?

My breeding loft counts 25 to 30 breeding couples, on my racing loft I have 72 widow hens and 16 widow hens. We fly according to the classic widowhood system where the partners stay at home. We have +/- 200 youngsters that are been trained and they are flown on all flights and also the 4 national flights. From then on, we can make a strict selection to become yearlings and good racers…

Some tips and tricks from Joël Verschoot
for the pigeon fanciers using DE REIGER :

Take care of your pigeons every day, it requires a lot of work and energy but you will be rewarded for it.

Try to keep a system of feeding, training and being in your loft at the same time every day, give them a good pigeon food like Vanrobaeys and I give almost 2 – 3 times an extra product of De Reiger / week. In the flying season almost every day.

Give them good training around the loft and put them on pigeon races, the baskets will tell you with the results if they are in “good health and condition”

Joël Verschoot alias “Mister Armando” does it again with his 5th 1st National victory in 9 years time. Moreover, the 4° Nat Valence was also clocked, and this under tropical conditions.

It seems to be the trademark for the Joël Verschoot who runs a pigeon colony hard and successfully. Joël Verschoot is a man of few details, it’s all about working, flying and above all, performing… Those who cannot cope with the heavy regime that is imposed on the pigeons, are not destined for a long life at Ingelmunster.
Basket them a lot on races, look to the performances and be hard in the handselection. That is how Joël Verschoot built his pigeon strain around real ‘flying experts’. Hard pigeons that can go into the wind and beat their competitors,… is the spirit of Mr Joël Verschoot. No one is surprised anymore when the Verschoot pigeons do it again on a national race in heavy flying conditions.. The stunt result from Angoulême 2018 (flown in hot weather at 35 degrees and above) is still fresh in everyone’s mind, as it marked the breakthrough in name recognition for Joel and his high performance team of pigeons. The day Armando unleashed his devils once more, and brought world fame as the winner of the 1° Nat Angoulême, followed one minute later by that other star flyer Contador, who won the 3rd National. The most striking and beautiful thing about this success story is that both pigeons were preceded by 10 minutes by the yearling Baziel, who won 2nd Nat Angoulême YL (then only beaten by the magnificent Angoulême Vooruit of Norbert and Stefan Ally). Let this 2018 racing performance now be the basement of the story for the national victory from Valence in 2022.

The weather conditions were almost the same. Clear bleu sky, but very hot weather around 38° and more over in France, and up to 35-36° in Belgium. Where many pigeons take a break or stop, the Verschoot pigeons continue forward. It returned out in a new vicory with the 1st & 4th prize National Valence against 6,056 pigeons. Already the 5th 1° National victory within 9 years, each time in heavy weather. An overview:

This national victory of Valence did not as a sudden. Also the national Argenton (500 Km), which took place on the same day, was a heavy task for the pigeons. Also here, the Verschoot pigeons were present with top prizes on a national level, and a very strong racing result

Bisty’s national victory is certainly no coincidence. After previously winning a national top prize at the hot Angoulême in 2018, and in the same weather conditions on Aurillac in 2019 (each time within the national Top 100), he now – in almost identical circumstances – managed to shake a new piece of power out of his wings, and beated the entire field of competitors, and won the fifth national victory within 9 years for Joël Verschoot. His list of honour:

As already mentioned before, this Bisty has it all, being the full brother of top racing pigeon Baziel.

Finally, the big one who signed for the 4th National from Valence, is Alibaba With this top performance from Valence, he was not performing a “lucky shot” In 2020 he already won 1st Provincial from Montélimar. Let’s have a look at his list of performances:

This Alibaba is a descendant of the old line of Joël Verschoot, crossed with the noble Gaby Vandenabeele blood.
Father: Profeet BE12-3041843
Full brother to Prof: winner 1st Prov Tours… and half-brother to superstar Contador (same father), son of strong breeder Deprez BE05-3088024 x Shakira BE09-3127246 (the golden foundation-mother at Joël Verschoot).
Mother: Claudia BE15-3006196
An 100% Gaby Vandenabeelehen, received from fancier Johan De Schryver from Eeklo.

This masterpiece of racing on Valence brought a real happiness to Mr Verschoot and showed again the superior quality of his pigeons to the world. Well done Joël ! Congratulations to Joel, his wife Annie, his son Dieter and the entire Verschoot family.

← Look at previous references Look at the next reference →