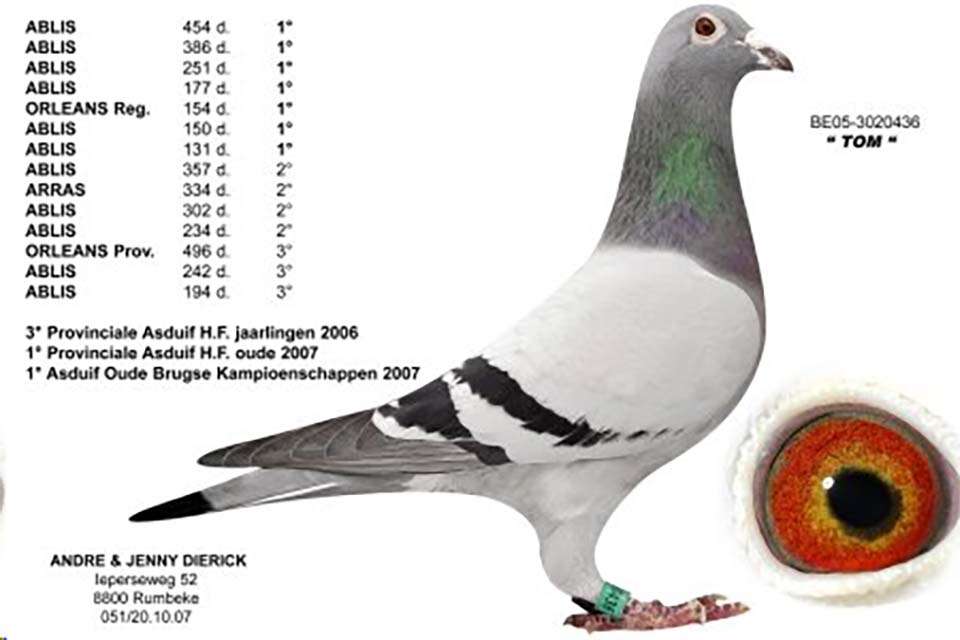 Jenny has been playing successfully with the products of De Reiger for several years. As a middle-distance fancier, she weekly is competing against every middle-distance fancier in West Flanders. Her constant performances of the last years are the proof of that. Jenny plays under the name André & Jenny Dierick in Rumbeke.

Her loft consists of +/-30 widowers and yearly she starts the season with 60 youngsters. Every year 14 to 15 yearlings complete the racing team in function of their pedigree and constant performances.

The game and feeding system:

Around the end of November they are paired for winter breeding (breeders and widowers). Once the cocks “look” at their hens again, all widowers are separated.
In February vaccination against paramyxo (both old and early youngsters)
At the beginning of March, the widowers are coupled and incubated for 5 days, after that they go on total widowhood. In the meantime, they are lightly fed.
As soon as the weather conditions allow, the pigeons are trained.
The first flight is Arras, but they only start when the weather is good. Before the start there is a 6-day cure with Tricho-Plus on the feed with Basis Mix De Reiger.

Every week 1 day Elixier De Reiger Furthermore, regularly Amifortis / Pural+ and Energol de Reiger On returning home Herbisan + Pural+ and/or Amifortis in the flight or returning home was difficult. For the youngbirds, the same feeding system is used as the old ones and yearlings. They are darkened from the beginning of march until the end of may. Always light food and from the middle distance races they play on the system of the sliding door.

The pigeons train 1 h to 1h10 minutes per day. As a daily food Jenny Sport uses Galaxy light of the company Beyers and Rui to the hens and breeders. On arrival at home Pural+ with Herbisan is given 1 or 2 days a week and if necessary a teaspoon of Amifortis De Reiger.

Hens are not played by Jenny. The best hens go to the breeding loft and there she follows the advice on Heartbeat Condition and form which she obtained from Dr. and pigeon judge Paul Lemahieu. 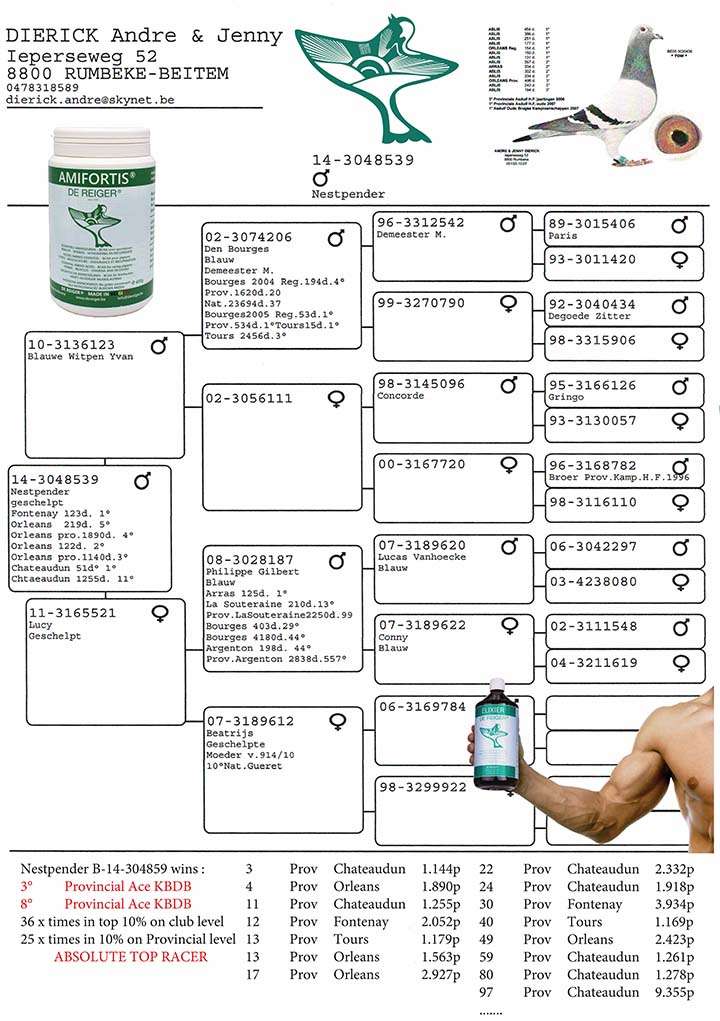 Out of : “Blauwke 15”: 3007015/97 with the “Oosterlinck-hen” 3106095/02 (bought at A & R Oosterlinck, she is from the line of the “Sultan” on the mother’s side).
“Het Blauwke 15” is father of “Tom”, also a beautiful speed and middle distance pigeon. In his turn he is sired by “Jonge Stier” 3315901/96 via Eric Vermander (from his “Stier-kind”) with “3227773/95” ( hen from the “Blauwe Sultan” x “‘t Geschelpt E. Vermander”).
Further on we find in the pedigree hen “Lucy” which is a stock hen on the breeding loft out of the bloodlines of Luc Christiaans / Lucas x Connie of Luc Van Houcke – Oedelem. Furthermore Jenny succeeds very well with the bloodlines of “Romario” line and “oude Stier line” Vermander. Furthermore the breeding team is reinforced with descendants / brothers / sisters of 6 x 1° provincial winners in 2018.
Before pairing, there is always a 6 day cure with “Tricho-Plus” and after that Basis Mix with Energol is given in the feed. This is the best way to start the breeding season.

What a history of Jenny & Andre Dierick Rumbeke :
In the 80’s and till half of the 90’s they raced on Clermont – Dourdan – Orléans …the competition. Victories, chain series of top prizes and provincial ace pigeons were the trademark of the house. In this period they obtained the following provincial ace pigeon titles:
– in ’84: with de “Schicht”
– in ’87 : with “Sultan” (later a super breeder)
– in ’90 : with “den As” – in ’92 : with “Straaloge”
– in ’93 : with the “Provinciaal” (on speed distance)
– in ’95: with “Provinciaal” (on middle distance)

Here we don’t even mention the many close places of honour they obtained in the provincial ace pigeon competition ! It was also the period in which certain Dierick pigeons became a concept in the region real cracks like the “Van Impe”, the “Bijter”, the “Schicht”, the “Sultan” appealed to everybody’s imagination ! They were not only all great champions but also exceptional breeders who kept up the “crown” of this top colony through their descendants. Not only on their own loft these exceptional racers and breeders delivered excellent offspring, also on other lofts the Dierick pigeons were very successful Especially the line of the wonderful “Sultan” has become “the top of the bill” on several colonies.
2005 ! At the house of A & J Dierick 12 x 1st wins.
2006 ! At the house of A & J Dierick 13 x 1st wins

← Look at previous references Look at the next reference →